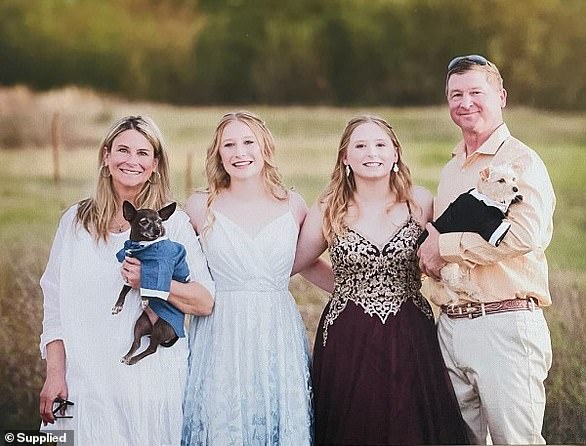 Jennifer Liebrum’s family have had to cut back on driving long distances across Idaho, meaning softball away games for 18-year-old twins Devon and Gracie are in the rearview mirror 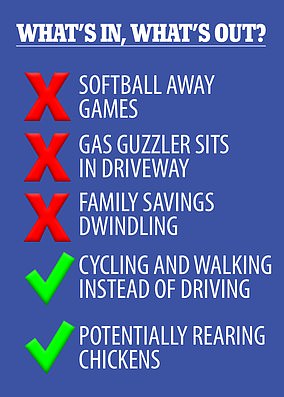 Jennifer Liebrum, 56, from Bellevue, Idaho, who works with special needs children, and husband Tyler Peterson, 51, a farrier, used to enjoy driving their twin 18-year-old daughters Devon and Gracie around the region for softball matches.

‘They canceled the team, because we’re not the only ones in the predicament,’ said Liebrum.

An SUV now idles in the driveway. The family increasingly gets around by walking and cycling in an effort to ‘get through this crunch’, she added.

Groceries used to cost $100 a week, but a recent haul of two days’ supplies was $170 — prices that left Liebrum feeling like she was ‘going to a jewelry store’.

Even driving 60 miles to the nearest Costco to load up on more affordable produce stopped making sense due to gas prices.

‘We’re considering getting chickens again, which I hate,’ she joked.

‘We’ve been getting ready to launch two girls into life. And now those savings are for survival.’

They are the sixth generation to live in the valley and ‘part of the pioneer group that established this place’, said Liebrum.

Billionaires like Elon Musk, Jeff Bezos and Bill Gates descend on the area in private jets each year for the nearby Sun Valley Conference, a networking extravaganza for tech and media moguls. 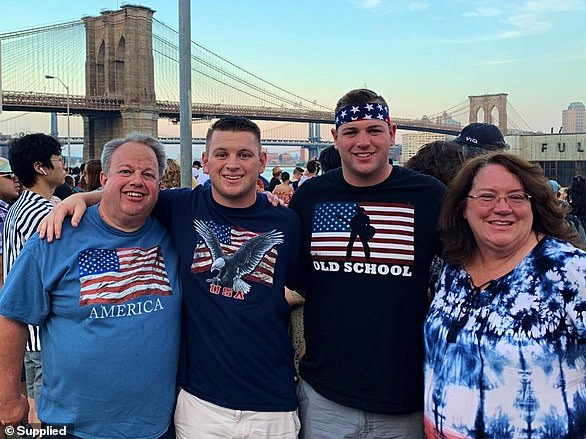 Thomas Crowell’s New Jersey family is struggling with inflation and the couple’s retirement plans have been pushed back, but the wedding of son Connor, 25, at the end of the year is a highlight on the calendar 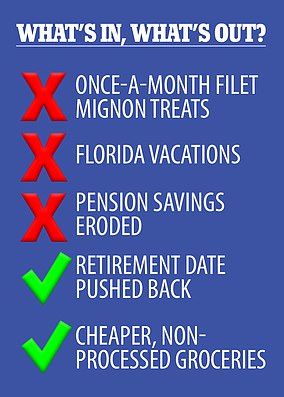 Thomas Crowell, 58, a benefit consultant from Forked River, New Jersey, says he has ‘cut back on splurges’ like the tasty filet mignon stakes he and wife Chris, 57, an administrative manager, used to savor each month.

Their son Jack, 21, lives at home, but Connor, 25, moved to Nashville, Tennessee, and is getting married later this year.

The Florida and Caribbean holidays the family previously enjoyed are in the rearview mirror.

‘We would go out to mom-and-pop restaurants three times a week, we’ve cut back on that,’ said Crowell.

Worse still, the couple’s retirement savings have been ‘eaten away’ as stock values ​​are ‘demolished’, said Crowell.

‘We do not know how long or deep this recession will be,’ he said.

‘When’s it going to be possible for us to retire?’

The country is ‘paying the price’ for overspending early on in the Biden administration, he added. 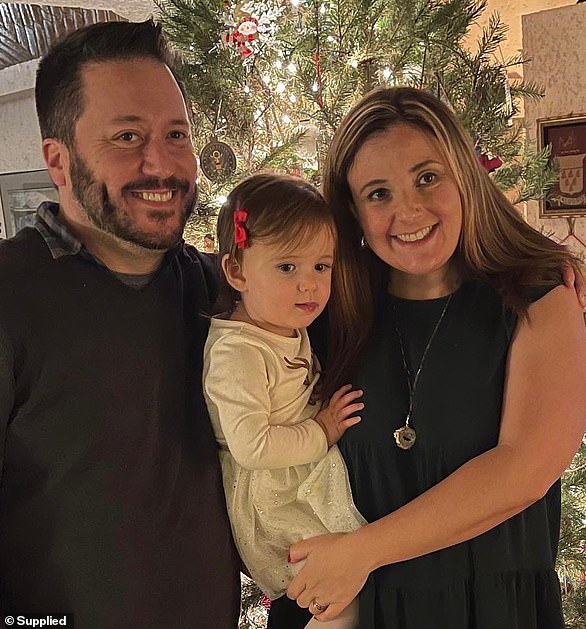 Megan Aaron, 36, has been struggling with gas, food and daycare costs for daughter Harper, two, but says the family is still ‘lucky’ to be able to make their rent and put food on the table 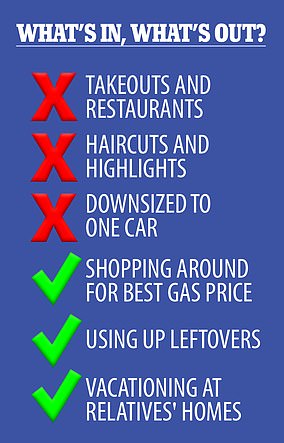 Megan Aaron, 36, a theater worker from Los Angeles, California, husband Tim, 43, a paralegal, and daughter Harper, two, did not have expensive vacations in Spain or Mexico this year.

Instead, the family holiday was to a relative’s home in Massachusetts.

Weekly grocery bills shot up from $170 to $220 and gas prices in California are among the highest in the country.

To make ends meet, Aaron is more careful about using up leftovers. She visits her hairstylist less often and has reverted to her natural brunette locks without highlights to save cash.

‘It has been really challenging,’ said Aaron.

‘Cutting out the luxury things that we just can’t do anymore.’

Downsizing to one car has been ‘logistically challenging’, she added, but the bigger problem is how the unstable economy makes it tougher to buy a home and plan for the future.

‘We’re very lucky that we’re able to afford our rents, daycare and the big expenses. We’re not in fear of being homeless or not being able to put food on the table,’ she said.

‘But it does make our lives a little more uncomfortable.’ 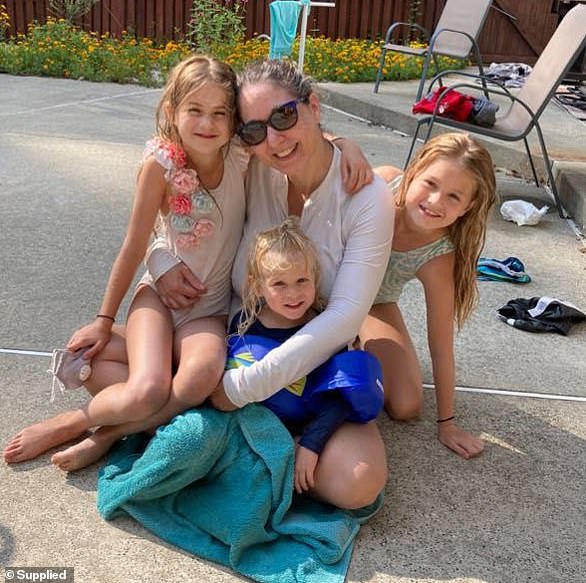 Summer camp was canceled this year for 11-year-old twins Daniella and Natalya Neubauer and their family. Instead of throwing off overseas for a summer vacation, the Neubauers spent a week at the Delaware shore 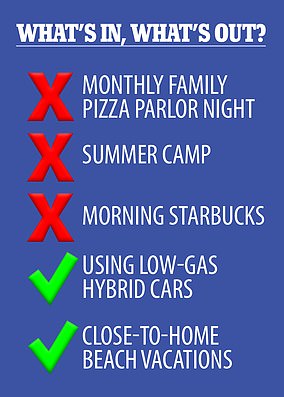 Family outings to the pizza parlor were the first casualty of the financial crunch for Sigurd Neubauer, 41, an online publisher from Maryland, his wife Hannah, 45, a doctor, their 11-year-old twins Daniella and Natalya and son, Cyrus, four.

The twins have to skip summer camp this year as prices have ‘skyrocketed through the roof’, said Neubauer. The household income is $100,000-$150,000.

Average camp costs have more than doubled to $178 a day from about $76 last year — putting them out of reach for many Americans.

International travel was off this year, and the summer vacation was a week spent on Delaware’s beaches.

The dad-of-three is skipping his morning visits to Starbucks and is brewing coffee at home instead.

Mum and dad both drive hybrid cars, meaning a full tank rose only from about $25 to $40.

While cutting back on restaurants, the family has focused on healthy activities like tennis and swimming.

‘This economy is going to be with us for a long time,’ said Neubauer.

He blames inflation on geopolitics and global food price hikes and other ‘structural problems that every American president would have to deal with’.